Let me set the scene!

It is a Monday morning, which is scary enough in itself. I hit the alarm snooze button at least three times before I begrudgingly drag myself to the washroom to begin my morning prep. In the spirit of true laziness, my AM skincare routine is minimalistic with nothing requiring wait times: Cleanser moisturizer & sunscreen. Done.

Nothing seems out of the ordinary besides the additional crabbiness that is usually associated with Mondays until I go to pump cleanser into my hands… Something is wrong with them. I figure my sleep blurred vision is playing tricks on me under the harsh, neon light. However, my eyesight adjusts & I try to claw the orange stigmata off my hands when I realize this is no trick.

My palms & fingers are stained as if I did an extremely poor job with self-tanner.

I grab my body scrub from the shower push the coarse grains against the stain, but the orange will not leave my body. I stare utterly confused into the sink trying to sleepily figure out what happened to me. I do not tan, I do not paint, I haven’t touched cleaning chemical in a week, I hadn’t eaten anything particularly messy the previous day… But then I remembered: 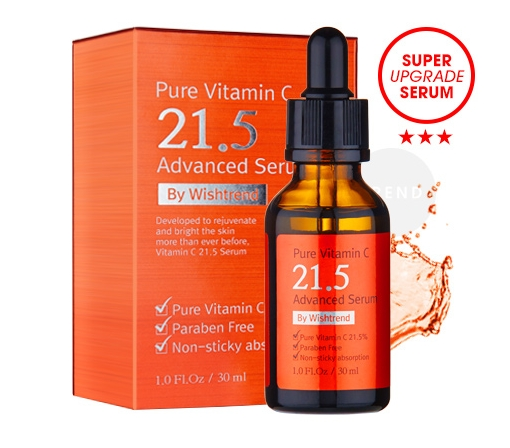 This is just the beginning of the cautionary tale though, the real horror began when I looked into the mirror at my face.

I have made a more detailed post on Vitamin C recently, but here are the cliff-notes: Vitamin C comes in multiple different types that can be more beneficial depending on your skin type, but they are commonly used as an anti-aging exfoliant that reduces hyper-pigmentation & scarring.

I use Vitamin C serums immediately after double cleansing in my PM routine, unless I am using AHA then Vitamin C will be the subsequent step after the chemical exfoliant.

The texture of the new formulation has been vastly improved from the C20 formula. It is still a clear form of Vitamin C, but it dries better & actually absorbs into the skin leaving behind a non-sticky finish. It feels lighter & spreads with ease. I really wanted to like this new version.

This smells like fresh citrus, but it is even more mild that the C20 [Old] version.

This Vitamin C comes in the typical packaging for this type of product, opaque bottle to decrease chances of oxidation with dropper. The only thing I can really point out is that the dropper feels more like plastic than the usual choice of rubber. It is not interfere with the product amount control, it just feels cheap.

At first glance, I am really impressed by the ingredient list. The ingredient list has been cut in half, the niacinamide that counteracts Vitamin C has been eliminated & preservatives have been improved. While I disagree parabens are unhealthy, they are not the best preservative so it is nice seeing replaced for the better.

My one disappointment is that Vitamin E has also been eliminated from the new formula. A brief breakdown is Vitamin C improves the appearance of skin, Vitamin E improves the texture. Tocopheryl, commonly used version of Vitamin E, is an acne trigger so the elimination makes it more universal to different skin types.

The new & improved Vitamin C serum was not nearly as good in practice for me. So how can Vitamin C make you look Ganguro?

Vitamin C serums may not absorb for a number of reasons, heavy application to poor formulation, then it can oxidize on your skin & turn your skin into Cheeto stains.

It may seem like I have made rookie mistakes of not washing my hands or applying too much serum to my face, but in defense of my own ego I am not a Vitamin C newbie & I bought this 21.5 serum in-store with a manufacturing date that was less than 1 month old. I have been using this type of product for about a year & half and I have tried 7 different Vitamin C serums including the OST C20 version.

I have never had a reaction like this before!

My hands turned this brilliant shade of orange after only 2 application of the C21.5, you can tell where I put the serum in my palm & the fingers I use for application. Vitamin C is one of the early steps in my skincare routine. My face only had the slightest twinge of orange, I am still surprised it managed to oxidize on my skin of quickly. 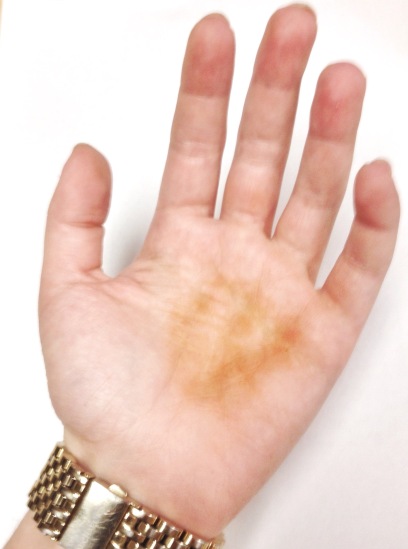 The new formula doesn’t have any common acne triggers, but I still broke out on my chin. This is the only new product in my routine &  I very rarely get full fledged pimples so my face really doesn’t like something in this short ingredient list.

It has 0 acne triggers & 0 irritants according to CosDNA.

LAA is one of the most effective forms of Vitamin C, but it is not as stable as other forms & may be too harsh for sensitive skin types.

This is a form of Lactic Acid, as well as a water-binding & pH adjusting agent.

This is a form Hyaluronic Acid, which is great for dry skin since it boosts moisture content while reducing water loss & inflammation.

Water may not seem particularly sexy, but it is infused with an antioxidant proven to improve skin’s texture & it is another source of Vitamin C. Obviously this is not as powerful as the seed extract form, but it has should provide more benefits than just standard water.

A major issue with the C20 formula for me was it dried out my skin, it had multiple forms of poorly formulated alcohols. I had a hard time understanding the C20 target audience because it was too harsh for sensitive skin types, contained common acne triggers & too drying for drier skin types.

However, this is the only type of alcohol in the new version & it is one of the best alcohols available in skincare, while also containing Vitamin B & water retention [humectant] agents.

This was another formula improvement for me in the new version. Xanthan Gum is one of my favorite natural ingredients that acts as a formula stabilizer & Hexanediol is a preservative known as a antimicrobial agent.

This is a product of Uric Acid, which is supposed to be one of the best anti-irritant & making the new formula much more gentle than the old.

The OST serums have always been on the more expensive spectrum of Vitamin C serums. The average western SAP Vitamin C serum can be obtained in the USA for $14 – $19 including shipping fees. OST Vitamin C is LAA, meaning it is one of the most effective forms, but unless you live in a major city then you will also have to add shipping fees onto the $25.00 price tag.

Shipping doesn’t just include additional expense, but also additional time. Vitamin C has a short shelf life by nature, lasting 3-4 months before oxidation. Since OST will likely be shipped from abroad, it may take a month before it is on American soil & that is one less month it is viable for use.

This means you could be paying about $100 – $150  per year to have this Vitamin C consistently in your skincare routine.

I do think the C21.5 is a vast improvement from the old OST version, but I still think there are formula issues. The new formula seems to oxidize much quicker than the old version & it had some sort of acne trigger for my skin. It is one of the more expensive Vitamin C serums, I would recommend purchasing whatever cheaper vitamin c serum is available on your local Amazon.